THE launch of new Metrolink services to Droylsden is just over a week away – and local residents will be given free introductory travel on the East Manchester route.

The new 3.9-mile (6.3km) section to Droylsden will open to the general public on Monday 11 February.

“We are now just a few days away from a very special moment – an historic moment for Metrolink, Manchester and Tameside."

Residents living next to the route from Manchester to Droylsden will be able to use the new line for free over the three days leading up to the launch – Friday 8 February to Sunday 10 February – on production of a special invitation.

As a gesture of thanks for being patient with street-level construction households in the catchment areas agreed with Manchester City Council and Tameside Council will be sent their invitations through the post in the coming days.

Councillor Andrew Fender, Chair of the Transport for Greater Manchester Committee, which oversees the Metrolink network, said: “We are now just a few days away from a very special moment – an historic moment for Metrolink, Manchester and Tameside.

“I have been eagerly awaiting the launch of services to Droylsden since funding was confirmed in 2008. A great deal of hard work has gone into this new line, a great deal of challenges overcome, and we are now on the cusp of realising the benefits of all that effort.

“I want to thank the people of Manchester and Tameside for their patience, and trust that it will be rewarded many times over. I am in no doubt that Metrolink will be of huge benefit to residents and businesses in both areas – just as it has been everywhere else it serves.”

Tameside Council Executive Leader Councillor Kieran Quinn said: “There is no doubt that the arrival of Metrolink to Droylsden will be a massive boost for the people and businesses in the area.

“Monday 11 February is the date I and many others have been looking forward to for four years because that’s when we can finally put all the disruption and turmoil behind us once and for all.

“Of course the good news doesn’t end there because the line to Ashton is continuing at a pace and is set for completion this year, which will offer a further boost to the town’s economy.

“I know it’s been a long time coming but I feel sure that once it is established everyone will get on board and give it the support it deserves.”

Councillor Nigel Murphy, Manchester City Council’s executive member for the environment, said: “The new Droylsden line will make it easier for people to access jobs and other opportunities in Manchester city centre, as well as all the exciting sports and community facilities which will open soon near the Etihad stadium.

“I hope people both in Manchester and Tameside will take advantage of these three days of free travel so they can see for themselves just how convenient the service will be.”

The new services will run from the existing Metrolink stop at Manchester Piccadilly through the key regeneration areas of Ancoats, New Islington and Beswick and the heart of East Manchester. 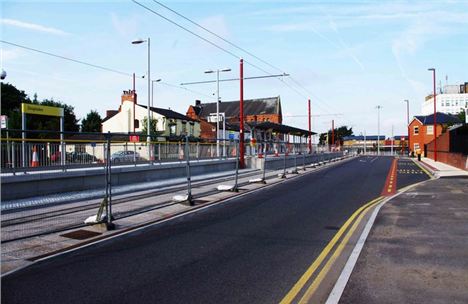 The line will run under Great Ancoats Street, through Holt Town towards Etihad Campus (Manchester City football stadium) and the Velodrome.

From here, between Clayton and Droylsden the line will run on-street along Ashton New Road and Manchester Road.

Tickets to any of the stops in Manchester city centre, up to and including Manchester Victoria or Deansgate-Castlefield, will start at £3.40 for a peak ‘anytime’ single from the Droylsden and Cemetery Road stops and £2.40 from the Edge Lane – New Islington stops.

A range of weekly, four-weekly, quarterly and annual season tickets also be available.

Services starting at Droylsden will run on through Manchester city centre – calling at the Manchester Piccadilly, Piccadilly Gardens, Market Street, Shudehill and Manchester Victoria stops – before serving all stops on the Bury line.

Passengers will be able to connect with services to Altrincham and Eccles at Manchester Piccadilly or Piccadilly Gardens, and services to Chorlton and Shaw via Oldham at Market Street.

The line to Droylsden is already being extended by a further 2.3 miles (3.8km) to Ashton-under-Lyne town centre, providing additional stops at Audenshaw, Ashton Moss, Ashton West and Ashton-Under-Lyne. This section is due to open in winter 2013/14.